Last time, I explained the camera operation of "Fatal Frame 4".

This time, I will explain the operation of Spirit stone flashlight.

I have omitted the items that are common to the camera, so please see the previous blog.

【How to use Spirit stone flashlight】 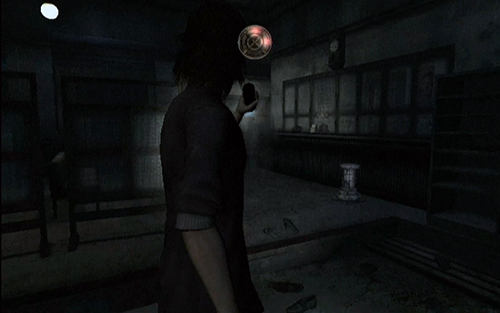 Press and hold the A button on the controller to spread the light. 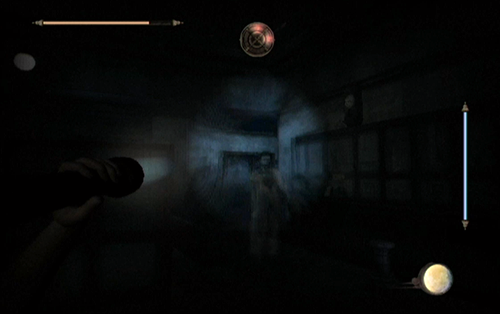 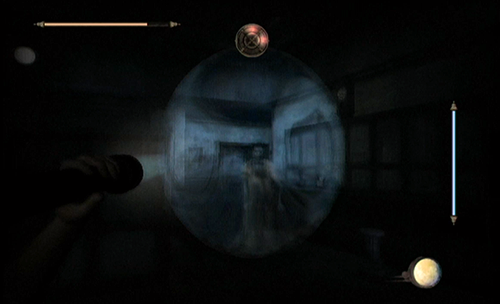 Instead of waiting for the enemy to approach, you move forward. 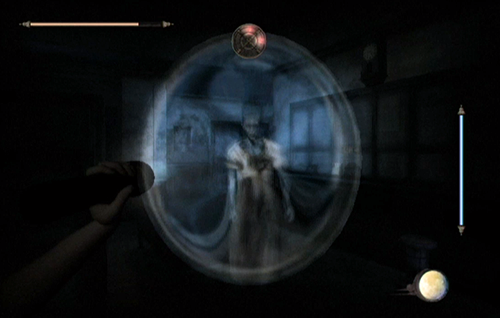 Release the A button on the controller to attack. 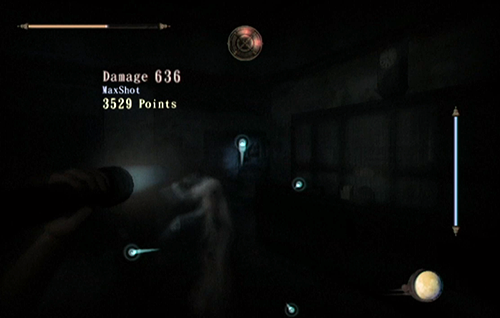 Why should I get closer to the enemy?

If you are far from the enemy, the enemy may disappear.

The disappeared enemy attacks from behind.

Also, if there are multiple enemies, they will be attacked from the front and back. 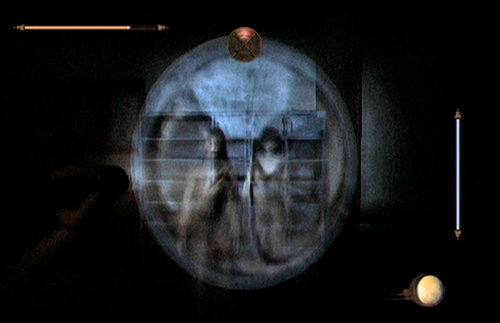 Therefore, when an enemy appears, it is better to approach and attack from yourself.

However, in the case of a camera, it locks on and accumulates the power gauge before attacking, so if you approach the opponent from yourself, you will be attacked by the opponent before the power accumulates. 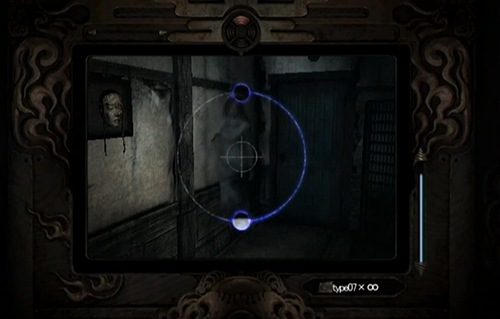 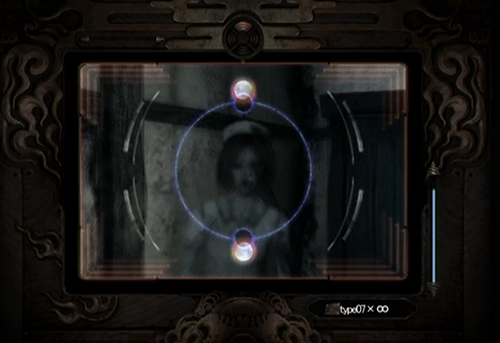 The camera and Spirit stone flashlight have different attack methods, so it's confusing at first.

Attacking an enemy reduces the energy of flashlight.

The energy of flashlight is indicated by the amount of missing moon in the lower right. 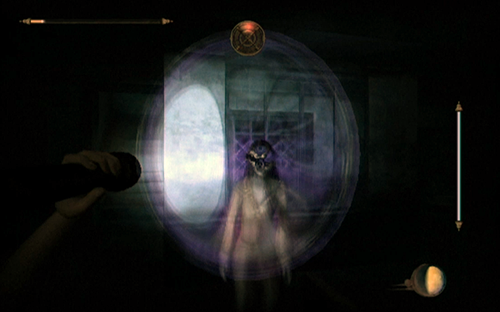 Stop the attack when the lower right moon is missing.

If you run around, the moon will return to its original state over time. 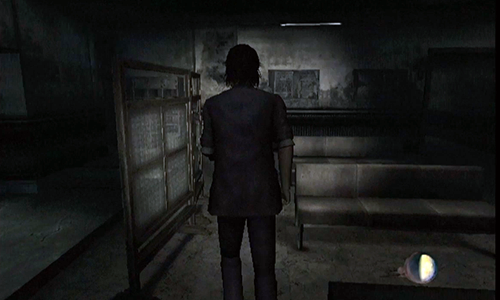 【Take a picture of the ghost with Spirit stone flashlight.】

Press the B button to point the flashlight at the ghost.

Press the A button and release it immediately. 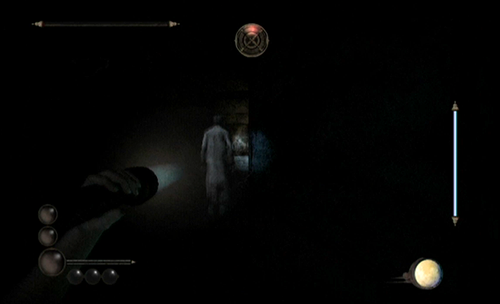 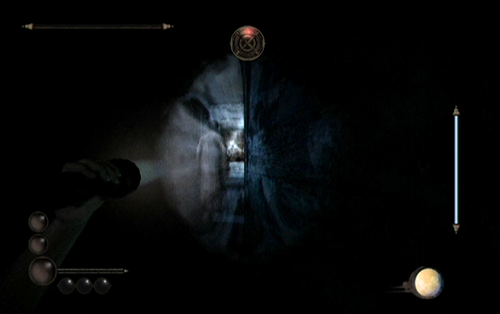 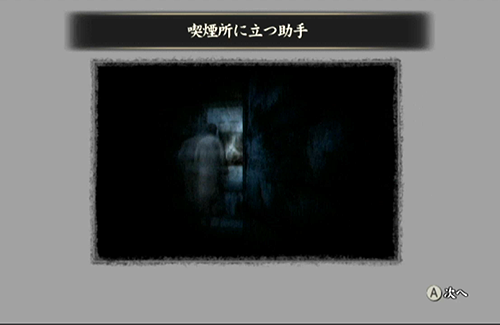 When you defeat the first enemy in Chapter 3, you will pick up the reinforced lens "Sha".

With this lens, you can take pictures with flashlight.

However, you can take ghost pictures without a lens.

The lens "sha" is necessary when taking hints.

Hint shooting was explained in the previous blog.

It is to take a picture of the place where the blue haze appears. 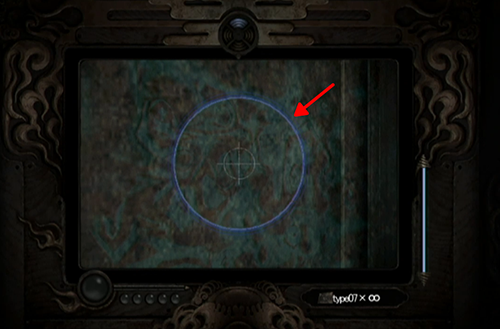 There is a problem with the lens "Sha".

If you attach the lens "Sha", you will not be able to attack the enemy.

At the beginning of Chapter 3, we will pick up the lens "Sha" and the Equipment function "Kan".

The Equipment function "Kan" allows you to attach three types of lenses to the flashlight.

You can switch the lens with the up and down arrow keys on the controller.

For example, suppose you can select "Sha", "Hari", and None.

Press the up and down arrow keys to set the lens to "Sha" and take a hint. 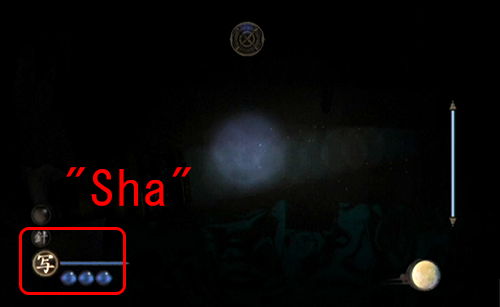 When you're done shooting, press the up and down arrow keys to "Hari" or "None" the lens. 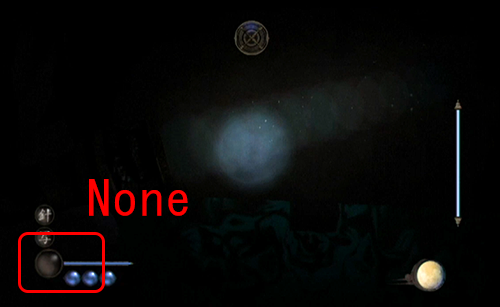 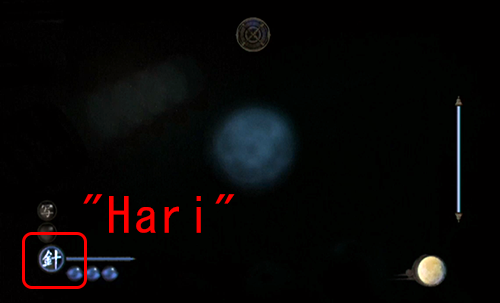 Like the camera, it can be enhanced with the piece of Red spiritual power. 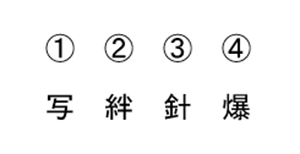 The operation is the same as usual.

2.Increases the chances of continuous attacks.

Just equip it to flashlight, there is no particular operation.

3.Make a powerful attack on only one person.

Press and hold the C button on the controller to spread the light.

Release the C button on the controller to attack.

4.Blows away enemies and causes damage.

Press and hold the C button on the controller to spread the light.

Release the C button on the controller to attack.

【Enhance the basic performance of flashlight】

Like the camera, it can be enhanced with the piece of blue spiritual power.

1.The irradiation range of flashlight light is expanded.

2.flashlight Extends the reach of light.

3.Flashlight charging time will be faster.

5.You will get more points when you succeed in continuous attacks. 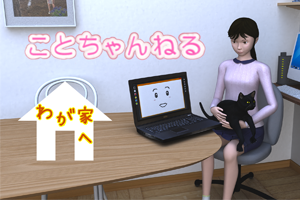